Moonie Yoga – the moon and its relevance to yoga 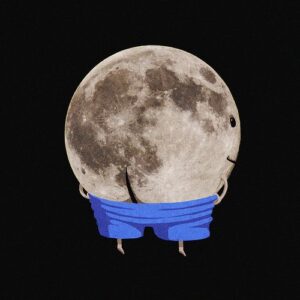 I’m sure you’ve all been to a yoga class at some point and the teacher has said something along the lines of; “My energy is all over the place today because it’s a full moon/new moon/super moon (delete as applicable)” and you’ve thought to yourself; “What has an astronomical body orbiting Earth, and the planets only natural satellite got to do with yoga and why would it impact your energy? How bizarre!”

Well wonder no more as our August blog dives into moonie yoga.

Moonie yoga????? Nope, not yoga that involves flashing your bottom off and giving it a wiggle whilst practicing yoga…. think more the moon and its relevance to yoga. 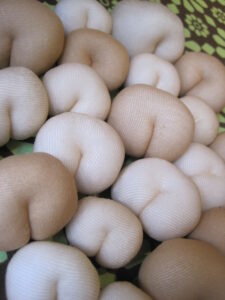 The first thing that you need to know about the moon is that it is actually classed as a “she” and the sun is actually classed as a “he”.  Think back to yin yoga from our June blog…  yin is the female, cooling energy linked to the moon, whereas yang is the male, heated energy linked to the sun.  The moon also equates to a woman’s menstrual cycle which is a cycle that lasts on average 28 days…. see there’s a reason behind everything!

Another interesting fact that you need to know about the moon, which is quite a sad fact, is that the moon has no light of its own ☹.  The moon gets its brilliant illumination from the reflection of the sun’s rays.

With no sun, the moon would not shine.

Again, this links back to knowing that you can’t have yin without yang, light without dark, love without anger – it’s all one big giant balancing act created by the Universe.

So, the main moon phases are; new moon, waxing crescent moon, first quarter moon, waxing gibbous moon, full moon, waning gibbous moon, last quarter moon, waning crescent moon and balsamic moon.  I know this sounds like an advertisement for Jaffa Cakes but I can assure you these are the full phases of the moon which is a cycle that lasts an average of 29 days.

For the purpose of this blog, we will look at the main moon phases and what each one of these phases means to us yogis and our energies. 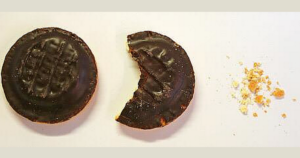 The new moon is the first lunar phase when the sun and the moon have the same ecliptic longitude (i.e. – the moon is between the Earth and the sun and so the side of the moon that faces Earth is in shadow).

The new moon symbolises new beginnings and so is a very good time to reflect on what you want to achieve or change in the upcoming lunar cycle (until the next new moon). It is a great time to slow down and focus inward.  Yogis tend to use a new moon to practice yin yoga, restorative yoga, yoga nidra and meditation to use this time to restore energies.

As the moon starts to move out of the shadows, more of it becomes visible.  A waxing moon is the phase the moon takes from new moon up to the moon’s visible surface being illuminated all the way to the full moon (this includes waxing crescent moon, first quarter moon and waxing gibbous moon phases).

The waxing moon symbolises action and putting plans into place.  This is a great time to be creative and put your plans from the new moon into action.  Yogis tend to use this time to practice any form of yoga which they feel is creative.  Maybe working on vinyasa flows or creative sequencing.

The full moon symbolises a time when our plans and energy from the new moon will reach their peak and is a great time to harness the powerful energy at this time.  Yogis tend to use this time to practice moon salutations (Chandra namaskara), or more dynamic forms of yoga such as ashtanga or power yoga.

It’s also worth mentioning that in some yoga traditions, full moon and new moon days are yoga holidays and yoga shouldn’t be practiced at all.

The waning moon is a time to start slowing down and reflecting on anything you have learned from your new moon journey up to this phase.  It is a good time to let go of anything that hasn’t served you, break habits and start to restore your energies for the upcoming new moon and onwards.  Yogis tend to start slowing down their practice again at this stage of the lunar cycle and focus on conserving energy with slow flow yoga and yin yoga. 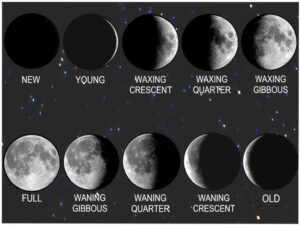 There are 13 full moons each year (remember the 29-day cycle?)  You will often hear your yoga teacher say something along the lines of; “It’s a supermoon this week”.

A supermoon occurs when the moon is especially close to the Earth when it is full and so looks bigger and like a “Supermoon”.

You may also hear your teacher refer to full moons as a blood moon/strawberry moon/blue moon/cold moon (delete as applicable).  And again, you may be wondering what the difference is.

For millennia, people have used the moon to keep track of the passing year and have set schedules and times for what we should be doing at that time of the year with things like; hunting, planting, harvesting etc.  Ancient cultures the world over have given these full moons names based on that schedule of what we should be doing or for the weather that month. 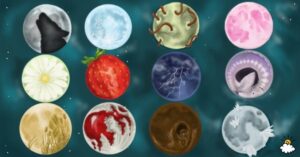 The following list and dates for full moons in 2020 are taken from the Old Farmer’s Almanac and uses their Native American names;

June – Strawberry moon (Named after the harvesting of strawberries)

August – Sturgeon moon (Named after Nicola Sturgeon…. Joke…. named after the sturgeon fish that is an abundance for fishing at this time)

The blue moon – Every two and a half years there is an extra full moon which is named the “blue moon”.  This is because the moon completes its final cycle around Earth, 11 days before the Earth has finished its cycle around the sun and these days add up.

The name “blue moon” is given to the second full moon of a calendar month and where the name comes from… no one knows.

Yoga and the moon

Very interesting stuff, but what has all this got to do with yoga I hear you ask.

Well apart from how the lunar cycle impacts our menstrual cycles, energy levels, and also the type of yoga we may want to practice, another interesting fact is the meaning of the term; “Hatha yoga”.

Hatha yoga is a generic term that refers to any type of yoga that teaches physical postures.  Hatha covers most types of physical yoga classes and usually includes some relaxation by means of savasana or pranayama. 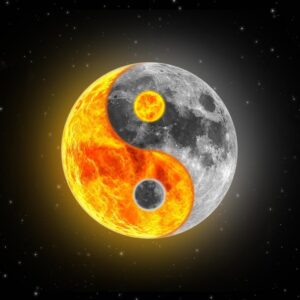 When we practice hatha yoga we work to unite those masculine and feminine energies (balance the yin and yang within us).  In a hatha class we usually have warm, energising postures such as sun salutations or warrior sequences followed by cooler, calming postures such as pranayama and savasanna.

See – it all links together nice and harmoniously.

One thing your yoga teacher may teach you at a full moon is a moon salutation (Chandra namaskara).  Moon salutations are not as popular in yoga classes as sun salutations but are still part of a good, full balanced yoga practice.

1 – An upward salute and side bend

13 – Upward salute and side bend 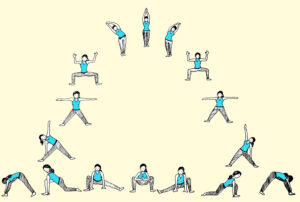 Moon salutations are good to practice on a full moon and in the evening.

So there you have it… what does the moon have to do with yoga… everything! But even after reading this blog, the moon does not resonate with you and you still think it’s not scientific enough for you, that’s fine too.  Maybe on the next full moon you could open the curtains, grab a glass of wine and use the moon’s beautiful glow to bask naked and free.  That also sounds bliss and let’s face it, who doesn’t love to look at a bright and wonderful full moon…she is a beauty!